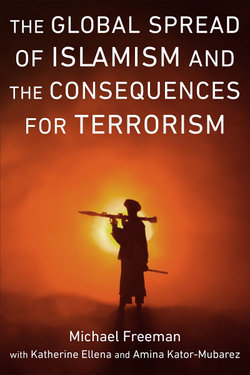 The Global Spread of Islamism and the Consequences for Terrorism

The Global Spread of Islamism and the Consequences for Terrorism examines the causes of terrorism, and how potential causal factors have changed over time by looking at several key events of 1979.

Terrorism motivated by Islamist religious ideology has been on the rise for the last forty years. Why? The three prior waves of terrorism - anarchist, nationalist, and Marxist - arose generally from a combination of geopolitical events and local grievances. This "fourth wave" of terrorism, however, has risen out of a different set of conditions.

Existing analyses of terrorism often consider how terrorist ideologies have evolved or how grievances have changed over time. But these approaches miss what could be called the "supply" side of ideology - how state and nonstate actors have exported an ideology of Islamism and how this ideology has taken root beyond what grievances or ideological interpretations would predict.

Michael Freeman connect the dots between several key events in 1979 - the hostage crisis at the Grand Mosque in Mecca, the Iranian Revolution, and the Soviet incursion into Afghanistan - and the incentives these events created for different actors to spread the supply of Islamism, the institutions they produced in various countries, and the terrorists who emerge from these institutions.

In The Global Spread of Islamism and the Consequences for Terrorism Freeman examines four countries that have experienced this export of Islamism - Indonesia, Pakistan, the United Kingdom, and the United States - and briefly describes similar patterns in other countries. Understanding the importance of the supply side of Islamism helps us better understand the strength and staying power of this current wave of terrorism as well as opportunities to better counter it.

Michael Freeman, professional photographer and best-selling author, was born in England in 1945, took a Masters in Geography at Brasenose College, Oxford University, and then worked in advertising in London for six years. In 1971 he made the life-changing decision to travel up the Amazon with two secondhand cameras, and when Time-Life used many of the pictures he came back with, he embarked on a full-time photographic career.

Since then, working for clients that include all the world's major magazines, most notably the Smithsonian Magazine (for which he has shot more than 40 stories over 30 years), Freeman's reputation as one of the world's leading reportage photographers has been consolidated. Of his many books, which have sold over 4 million copies worldwide, more than 60 titles are on the practice of photography. For this photographic educational work he was awarded the Prix Louis Philippe Clerc by the French Ministry of Culture.

Freeman's books on photography have been translated into 27 languages.

Katherine Ellena is the senior global legal advisor for the International Foundation for Electoral Systems.

Amina Kator-Mubarez is a faculty associate at the Naval Postgraduate School for the Global ECCO (Education Community Collaboration Online) Project, sponsored by the Combatting Terrorism Irregular Warfare Fellowship Program under the Office of the Secretary of Defense.

Be the first to review The Global Spread of Islamism and the Consequences for Terrorism.

The Global Spread of Islamism and the Consequences for Terrorism