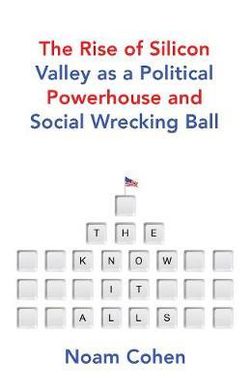 Silicon Valley's embrace of disruption and a rampant libertarian ideology is fracturing America and taking the rest of us with it..

But it began as an idealistic quest, in an obscure department of Stanford University, to create an artificial intelligence that would contribute to a profound betterment of society.

The provost didn't see why his university and its members shouldn't profit from their brilliant ideas. Sure, the lab wasn't great at including women or minorities, and its head of department rejected the very idea of authority. But really – what could go wrong?

The Know-It-Alls is the first full history of Silicon Valley, from the sleepy orchards of the nineteenth century through to the corporate titans who are now remaking our world.

Noam Cohen wrote the Link-by-Link column in the New York Times from 2007 15, reporting on Wikipedia, Twitter, Bitcoin, ad blockers and other disruptive technologies.

He lives in Brooklyn with his family.

Be the first to review The Know-It-Alls.