The Morning They Came for Us

A searing, intimate account of the conflict in Syria by someone uniquely equipped to tell the story from the inside

Winner of the Hay Festival Award for Prose

In May of 2012, Janine di Giovanni travelled to Syria, marking the beginning of a long relationship with the country, as she began reporting from both sides of the conflict, witnessing its descent into one of the most brutal, internecine conflicts in recent history. Drawn to the stories of ordinary people caught up in the fighting, Syria came to consume her every moment, her every emotion.

Speaking to those directly involved in the war, di Giovanni relays the personal stories of rebel fighters thrown in jail at the least provocation; of children and families forced to watch loved ones taken and killed by regime forces with dubious justifications; and the stories of the elite, holding pool parties in Damascus hotels, trying to deny the human consequences of the nearby shelling.

Delivered with passion, fearlessness and sensitivity, The Morning They Came for Us is an unflinching account of a nation on the brink of disintegration, charting an apocalyptic but at times tender story of life in a jihadist war and an unforgettable testament to human resilience in the face of devastating, unimaginable horrors.

Janine di Giovanni has reported on war for over 20 years. She has written seven books, including the critically acclaimed Madness Visible, The Place at the End of the World, and, most recently, a biography of the Magnum Photographer Eve Arnold. She is the Middle East Editor of Newsweek, a contributing editor for Vanity Fair and a regular contributor to the New York Times, Granta and Harper's among many others.

A frequent foreign policy analyst on British, American and French television, she has won many awards including Granada Television's Foreign Correspondent of the Year Award, the National Magazine Award, two Amnesty International Media Awards, the Spear's Memoir of the Year Award for Ghosts by Daylight and the Hay Festival Award for Prose for The Morning They Came For Us.

She is a Fred Pakis scholar in International Affairs at the Fletcher School of Law and Diplomacy, a member of the Council on Foreign Relations, has served as the president of the jury of the Prix Bayeux for war reporters and is a media leader at the World Economic Forum, Davos. She lives in Paris with her son.

Be the first to review The Morning They Came for Us. 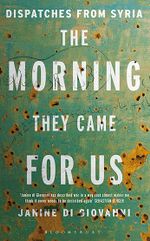 The Morning They Came for Us

Reportage & collected journalism Middle Eastern history News and Politics
Hold on while we process your request.