Readers of all ages will be enchanted by this gloriously illustrated edition of a beloved holiday fable.

Award-winning Russian artist Maria Mikhalskaya's phantasmagorical images recapture the spirit of E. T. A. Hoffmann's 1816 fairy tale, which served as the basis for Tchaikovsky's musical interpretation. The popular ballet, set to the Russian composer's irresistible score, adds a veneer of kitsch and cuteness. But the original, less-familiar drama, however, possesses elements of a stranger, darker, more intriguing nature. Like a Russian nesting doll, the narrative tells a story inside of a story inside of yet another story.

Hoffmann, who excelled in exploring the boundaries between fantasy and reality, drew upon the magic of Christmas to lend imaginative sparkle to the adventures of a little girl who falls in love with a nutcracker doll. A seven-headed mouse king and his army of mice, a mysterious godfather, and a vengeful rodent mother add spice to the holiday treat. This deluxe heirloom edition offers the chance to make an old tale into a new seasonal tradition.

Be the first to review The Nutcracker. 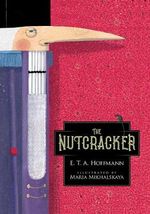 Classic fiction Myth & legend told as fiction Contemporary fiction
Hold on while we process your request.