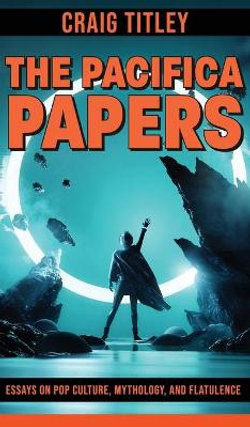 The Pacifica Papers - Essays on Pop Culture, Mythology, and Flatulence

Hollywood screenwriter and television producer Craig Titley (Marvel's Agents of S.H.I.E.L.D., Scooby-Doo, Cheaper by the Dozen, Percy Jackson & the Olympians: The Lightning Thief, Star Wars: The Clone Wars) has, for the first time, put together a collection of 24 essays written as part of his Phd program in Mythological Studies. These essays on pop culture and mythology contain his thought-provoking and often amusing reflections on topics such as: The Matrix, Close Encounters of the Third Kind, Barton Fink and writing for Hollywood, Kung Fu cinema, Joseph Campbell, farting tricksters, zombies, comedy, fairy tales, screenwriting... and a complete Jungian analysis of Scooby-Doo. If you're interested in diving into the deep end of pop culture and mythology then Titley's unique perspective as a Hollywood screenwriter, television producer, mythologist, and self-described Trickster may be just what the doctor ordered.


"If you're interested in mythology or storytelling and, in particular, if you're involved in the movie storytelling business like I was, then [Joseph] Campbell is your guide... but not your savior. Ever since it was revealed that George Lucas used The Hero With a Thousand Face as a guide while crafting the story for Star Wars, screenwriters and executives thought they had discovered the Holy Grail, the key to turning every movie into a giant resonating hit. But it doesn't quite work that way. There's much more to storytelling then painting by numbers or plotting by Campbell. It's a skill and a craft born of hard work, sweat and tears. But there's also a magic ingredient involved that no one, not even Campbell, knows how to describe... or where it even comes from. Without it no story can resonate and endure the test of time. It has less to do with a secret structural formula and more to do with alchemy... and luck.


But if there IS an answer, or even a hint at a glimpse of a notion of an answer, it probably lies somewhere in the field of Mythological Studies...


I'm really proud of the work I did [in these essays[ and even though they are academic papers, they feel like they still have my voice. While I was preparing them for publication I noticed that right out of the gate I was gravitating toward the Jungian Shadow and the Trickster. I was also being a bit of a trickster myself, writing academic papers about The Matrix and Gene Simmons and doing a full-on Jungian analysis of Scooby-Doo, Where Are You? My professor for that one, Dr. Glen Slater, wrote a note on the back: "I started reading this skeptically but ended somewhat of a convert... the Shaggy/Scooby 'fourth' thesis grew in strength as you went along." I was delighted. Not only did I convert him, I made him say "Shaggy/Scooby" academically and non-ironically! Score one for the trickster!


All of the papers in this anthology were written for classes at Pacifica Graduate Institute between the fall of 2004 and the summer of 2007. I'm presenting them in order so that, hopefully, there's some kind of evolution detectable. At the end of the book you can see what paper was written for what class.

Be the first to review The Pacifica Papers - Essays on Pop Culture.

The Pacifica Papers - Essays on Pop Culture, Mythology, and Flatulence