By the winner of the Pulitzer Prize for fiction in 2007, this is the story of a father and son walking alone through burned America, heading through the ravaged landscape to the coast.

A work of such terrible beauty that you will struggle to look away. – The Times

So good that it will devour you, in parts. It is incandescent. – Daily Telegraph

You will read on, absolutely convinced, thrilled, mesmerised. All the modern novel can do is done here. – Guardian

Cormac McCarthy is the author of many acclaimed novels, including Blood Meridian, The Road and No Country For Old Men.

Be the first to review The Road film tie-in. 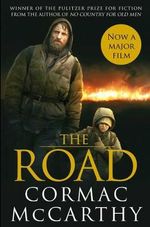 Contemporary fiction Classic fiction Science fiction
Hold on while we process your request.