by Patrick Guest and Jonathan Bentley

The first thing Gilbert sees when he hatches from his egg is the sky.

It is love at first sight and from that moment on Gilbert longs to fly like other birds.

But Penguins don’t fly, they waddle, and so begins Gilbert's quest to find his place in the world.

Great things happen when you reach for the sky.

Born into an ever-growing family of ten (plus pets), Patrick was raised in the Melbourne beachside suburb of Seaford. His childhood consisted of footy, running through the tea-tree, Dungeons and Dragons, and ten-part harmonies in the family’s bright orange and spluttering VW Kombi van. Even as a child, Patrick was writing stories, starring in his own Powerful Patrick series: a major hit with his Mum, Dad and rabbit Snowball.

Confusion, insecurity and his desire to be Michael J Fox took Patrick down the corporate path. After gaining a commerce degree at Melbourne University, followed by a three-year stint with a big mining company, Patrick realised that he was possibly the world’s worst accountant. A dramatic change saw Patrick go back to study physiotherapy and in 2000 he landed his dream job at the Sydney Olympics.

In his own time, Patrick continued his passion for writing: poems for retiring colleagues, love letters to his wife Lisa, epic emails of adventures abroad and stories gathered from the confessional plinth. And then: a flood. His first son Noah was born, followed by Reuben and Grace. He’d found his life calling and with that the next half of his career, as a story teller.

As a little boy, Jonathan Bentley liked football and drawing. When he was about eight years old he realised he wasn’t going to be good enough to play football for Leeds United, so he concentrated on drawing instead.

When he left school he studied at Brighton Polytechnic. Jonathan worked as a builder’s labourer and kitchen hand for many years before he became a full-time illustrator, and he worked in London and Sydney before moving to Brisbane, Australia.

Jonathan has been an Editorial Illustrator at the Courier Mail newspaper for ten years, and has illustrated books for Margaret Wild, The Wiggles and Andrew Daddo.

Jonathan likes to work with a range of materials including acrylics, oils, and line and watercolour, and he looks forward to the day when he has a big barn-like studio somewhere in the countryside.

Be the first to review The Second Sky. 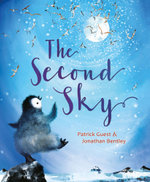 by Patrick Guest and Jonathan Bentley