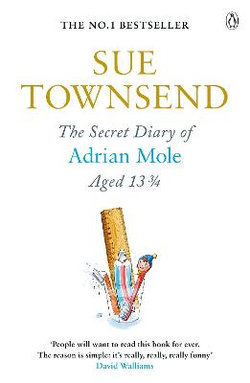 Be the first to write a review
Tweet
27%
OFF RRP  $19.99 $14.75
'Townsend has held a mirror up to the nation and made us happy to laugh at what we see in it' Sunday Telegraph Friday January 2nd I felt rotten today. It's my mother's fault for singing 'My Way' at two o'clock in the morning at the top of the stairs. Just my luck to have a mother like her. There is a chance my parents could be alcoholics. Next year I could be in a children's home. Meet Adrian Mole, a hapless teenager providing an unabashed, pimples-and-all glimpse into adolescent life. Writing candidly about his parents' marital troubles, the dog, his life as a tortured poet and 'misunderstood intellectual', Adrian's painfully honest diary is still hilarious and compelling reading thirty years after it first appeared. 'A satire of our times. Very funny indeed' Sunday Times 'We laugh both at Mole and with him. A wonderful comic read, that, like all the best comedy, says something rather meaningful' Heat

Sue Townsend was one of Britain's most popular, and most loved, writers with over 10 million copies of her books sold in the UK alone. The Secret Diary of Adrian Mole aged 13 ¾ has sold over 20 million copies worldwide and has become a modern classic.

Born in Leicester in 1946, Sue left school at 15 years of age. She married at 18, and by 23 was a single parent with three children. She worked in a variety of jobs including factory worker, shop assistant, and as a youth worker on adventure playgrounds. She wrote in secret for twenty years, eventually joining a writers' group at the Phoenix Theatre, Leicester in her thirties.

At the age of 35, she won the Thames Television Playwright Award for her first play, Womberang, and started her writing career. Other plays followed including The Great Celestial Cow (1984), Ten Tiny Fingers, Nine Tiny Toes(1990), and most recently You, me and Wii (2010), but she became most famous for her series of books about Adrian Mole, which she originally began writing in 1975.

Several of her books have been adapted for the stage, including The Secret Diary of Adrian Mole aged 13 ¾: The Play (1985) and The Queen and I: a Play with Songs (1994), which was performed by the Out of Joint Touring Company at the Vaudeville Theatre and toured Australia. The latter is based on another of her books, in which the Royal Family become deposed and take up residence on a council estate in Leicester. Other books include Rebuilding Coventry (1988), Ghost Children (1997) and Queen Camilla (2006).

She was an honorary MA of Leicester University, and in 2008 she was made a Distinguished Honorary Fellow, the highest award the University can give. She was an Honorary Doctor of Letters at Loughborough University, and a Fellow of the Royal Society of Literature. Her other awards include the James Joyce Award of the Literary and Historical Society of University College Dublin, and the Frink Award at the Women of the Year Awards. In 2009 she was given the Honorary Freedom of Leicester.

Her most recent novel, The Woman Who Went to Bed for a Year, was published in 2012 by Michael Joseph and was a giant success, selling over half a million copies to date in the UK alone.

Be the first to review The Secret Diary of Adrian Mole Aged 13 3/4. 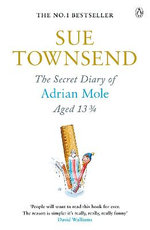