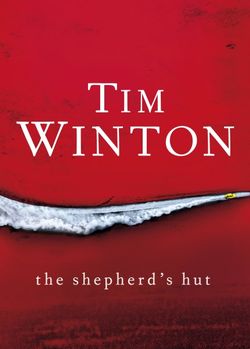 A rifle-shot of a novel - crisp, fast, shocking The Shepherd’s Hut is an urgent masterpiece about solitude, unlikely friendship, and the raw business of survival.

Jaxie dreads going home. His mum’s dead. The old man bashes him without mercy, and he wishes he was an orphan. But no one’s ever told Jaxie Clackton to be careful what he wishes for.

In one terrible moment his life is stripped to little more than what he can carry and how he can keep himself alive. There’s just one person left in the world who understands him and what he still dares to hope for.

But to reach her he’ll have to cross the vast saltlands on a trek that only a dreamer or a fugitive would attempt.

The Shepherd’s Hut is a searing look at what it takes to keep love and hope alive in a parched and brutal world.

“ I will never be able to unhear the voice of young Jaxie Clackton, plangent and profane, who is destined to become one of the greatest characters in Australian literature. ” Geraldine Brooks

“Winton’s novel of breaking and mending is a searing, ardent and deeply empathetic dive into the turmoil of a mutilated heart. I will never be able to unhear the voice of young Jaxie Clackton, plangent and profane, who is destined to become one of the greatest characters in Australian literature.” GERALDINE BROOKS

“Landscape and destiny are inextricable in Tim Winton’s latest novel, and the result is a gritty realism that ultimately propels the story into the timelessness of a parable. All that I love about Winton’s work is here: the poetry of the colloquial, fully realized characters, and the fearlessness to enter the deepest mysteries of being. The Shepherd’s Hut is a brilliant reminder that Winton is one of the world’s great living novelists.” RON RASH

“A masterpiece from a masterful storyteller. We have not seen many people like Jaxie in Australian literature. When reading this book I wondered if Winton had actually found someone like Jaxie and had simply recorded him telling his incredible story. This is the magic of this book. The voice is so authentic and the language of this young character rings true to the people I have met throughout my life. I will not forget this book.” ALEXIS WRIGHT

“A novel that reminds us what fiction can do. Here is a voice that digs into your viscera and changes you from the inside. This is fiction in the raw.” ROSS RAISIN

“Describes the chaotic struggle of new masculinity better than anything else I’ve read. As an exploration of the intergenerational trauma that plagues men, it couldn’t be more timely. Seriously, it’s incredible.” BEN QUILTY

“Even a regular Tim Winton novel — if such a thing exists — would knock most other novels into a cocked hat, but The Shepherd's Hut is Winton at the top of his game, and that's saying something. A fierce, pungent, slangy, humdinger of a book, with a real kick in the tail. Fiction doesn't get much better than this.” RUPERT THOMSON

“Shot through with the breathtaking evocation of landscape that is Winton’s forte, The Shepherd’s Hut is a hymn to the wild forces of nature and unsentimental belonging. Winton’s enviable ability to elicit passion for Jaxie through his immaculate, poetic and troubled rush of vernacular — no matter how terrible Jaxie’s actions — is broken, beautiful and ugly in all the best ways.” RAY ROBINSON

“Superb. It's rare to feel fury and hope on the surface of the skin at the same time, and more rare to find that convincing in a story.” CYNAN JONES

“Tim Winton’s Jaxie Clackton brings to mind the voices of other great survivors in literature, such as Huckleberry Finn and Oliver Twist, who struggle against impossible odds with pluck, common sense, and a refreshingly keen command of the vernacular. Once you start reading this book, you won’t want to put it down. A powerful, most compelling story.” BRAD WATSON