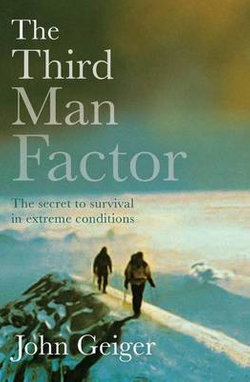 The Secret to Survival in Extreme Conditions

From Sir Ernest Shackleton on South Georgia Island to currency trader Ron DiFrancesco in the South Tower of the World Trade Center, to diver Stephanie Schwabe in the Mermaid's Lair of Grand Bahama. Hundreds of people in life-threatening situations have shared an experience that an unseen being - known as the Third Man - helped them survive apparently insurmountable odds. Over the years, the experience has occurred again and again - to mountaineers, prisoners of war, solo sailors, shipwreck survivors, aviators and astronauts. All have escaped traumatic events only to tell strikingly similar stories of having experienced the close presence of a companion and helper, and even 'of a sort of mighty person'. This Third Man offered them a sense of protection, relief, guidance and hope, and left the person convinced they were not alone but there was some other being at their side, when by any normal calculation there was none. So who is the Third Man? An angel? A hallucination? A second self? John Geiger spent five years researching and writing The Third Man Factor, and has assembled a compelling body of evidence for this remarkable phenomenon.

Be the first to review The Third Man Factor.