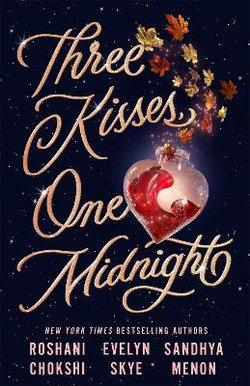 A story of magic and mayhem set around Halloween

by Evelyn Skye, Roshani Chokshi and Sandhya Menon
Paperback
Publication Date: 02/09/2021
Be the first to write a review
Tweet
$17.99

Every 100 years on Halloween, magic reawakens in the town of Moon Ridge, and any love forged that night will last forever. At least, that's what the founder's fable says, and best friends Onny, Ash, and True - better known as 'The Coven' - aren't taking any chances. After brewing a supposed love potion passed down from Onny's grandmother, The Coven set off in different directions to try to charm the loves of their lives. One falls for the unexpected suitor. Another paints himself into a corner. And the third refuses to believe in magic at all . . . until true love proves her wrong.

Evelyn Skye was once offered a job by the CIA, she not-so-secretly wishes she was on So You Think You Can Dance, and if you challenge her to a pizza-eating contest, she guarantees she will win.

When she isn't writing, Evelyn can be found chasing her daughter on the playground or sitting on the couch, immersed in a good book and eating way too many cookies.

She is also the author of the New York Times bestselling novel The Crowns Game.

Roshani Chokshi is the author of commercial and critically acclaimed books for middle grade and young adult readers that transport audiences to fantastical worlds heavily inspired by world mythology and folklore.

Her work has been nominated for the Locus and Nebula awards, and has frequently appeared on Best of The Year lists from Barnes and Noble, Buzzfeed and more.

Her New York Times bestselling series includes The Star-Touched Queen duology, The Gilded Wolves, and Aru Shah and The End of Time, which was recently optioned for film by Paramount Pictures.

Sandhya Menon was born and raised in India on a steady diet of Bollywood movies and street food, and blames this upbringing for her obsession with happily-ever-afters, bad dance moves, and pani puri.

Now she lives in Colorado, where she's on a mission to (gently) coerce her family to watch all 3,220 Bollywood movies she claims as her favourite.

Be the first to review Three Kisses.