Bill Leak's daily cartoons in The Australian newspaper have been variously described as the works of a genius and Australia's most insightful and thought-provoking arbiter of the main story of the day.

Thumbing through Trigger Warning, a collection of Bill's cartoons from 2016, it's easy to argue that those terms have not been used loosely. When one of the cartoons is this collection prompted the Human Rights Commission to take action under law 18C of the Racial Discrimination Act, it sparked a national debate on free speech, the right to laugh and the right to offend.

While one side of the Leak brain was outraged at this action, the other side saw it as manna from heaven. He used the ensuing debate to defend his rights through more brilliant cartoons, most featuring the Human Rights Commission's Gillian Triggs and Tim Soutphommasane, the main protagonists in the case brought against him. Bill was eventually justified when the case was withdrawn, sparking yet another hilarious (and jarring) cartoon to wind up the issue. In true cartoonist style, he had the first and last laugh while bringing a taboo issue (in this instance the demeaning behaviour of many Indigenous men in remote Aboriginal communities) to national prominence.

Sparking debate while making people laugh is what he does best and that's why he's a nine-time Walkley Award winner. Trigger Warning features a host of other insights on the stories of the day, covering a wide range of political and cultural topics and key moments from the year that was. They're all in the unique Leak style - beautifully drawn and coloured, with erudite, telling word bubbles - and when thumbed through in a bound collection, offer a humorous and thought-provoking take on 2016, from the demise of Labor attack dog Sam Dastyari, through to the introduction of the Safe Schools program, the election of Donald Trump, and onto the death of Fidel Castro. And, they're all drawn without fear or favour. As 2017 unfolds with the US on tenterhooks, the UK post-Brexit, refugee hordes flooding into Europe, the Middle East being the Middle East, China making inspection tours of the South Seas and a rogue Senate in Australia, the rights to laugh and offend might be the best way ahead.

For a cartoonist like Bill, not all bad news is Bleak.

Bill Leak (born 1956 in Adelaide, SA) was a painter, a writer and the daily editorial cartoonist for The Australian. Leak won two News Awards for Cartoonist of the Year, nine Walkley awards for excellence in journalism, nineteen Stanley Awards from the Australian Cartoonists' Association and been an Archibald Prize finalist twelve times.

His portraits of Bob Hawke and Bill Hayden hang in Parliament House, and his portraits of Sir Donald Bradman, Dick Woolcott mand Robert Hughes are in the collection of the National Portrait Gallery.

Leak's novel Heart Cancer was published by ABC Books in 2005 and he has published three collections of his political cartoons: Drawing Blood, Moments of Truth and Un Australian of the Year., 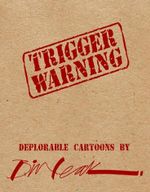 Cartoons & comic strips Humour and Pop Culture
Hold on while we process your request.