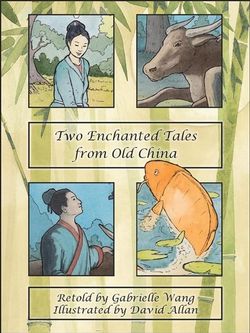 In the black velvety mantle of the night sky, two young people fall in love, only to be parted; while in a far-away time, a lonely and mistreated girl finds herself at a ball in a dress of sea green silk and a kingfisher cloak: two beautiful, magical tales from old China, The Weaver Girl and the Cowherd, and The Magic Fishbones, are here enchantingly retold for young readers by award-winning author Gabrielle Wang and evocatively illustrated by David Allan.
Two Enchanted Tales from Old China is the latest, and final, title in Christmas Press' Two Tales series: retold traditional stories from many lands and times, engagingly retold for young readers by established authors and beautifully illustrated by emerging illustrators. The series started in 2013 with Two Trickster Tales from Russia, retold by Sophie Masson and illustrated by David Allan, which was the launch title for Christmas Press. Eight titles have been published in the series, featuring tales from Scotland, Japan, France, Ancient Greece and Rome, Norway and Ancient Mesopotamia, and authors have included Duncan Ball, Kate Forsyth, Ursula Dubosarsky, Adele Geras, Margrete Lamond and Adele Geras. The illustrators whose work was showcased included Ingrid Kallick, David Allan, Fiona McDonald and Kate Durack.

Gabrielle Wang is an author and illustrator born in Melbourne of Chinese heritage. Her maternal great grandfather came to Victoria during the Gold Rush and her father from Shanghai. Her stories are a blend of Chinese and Western culture with a touch of fantasy.

Her first young adult novel, Little Paradise also received a Highly Commended in the 2011 Prime Minister's Awards. Gabrielle's picture book The Race for the Chinese Zodiac (2010) illustrated by Sally Rippin and Regine Abos was a Notable Book in the CBCA Awards for 2011 and shortlisted for the 2011 YABBA and WAYBRA awards. Her latest books are part of the highly successful 2011 Our Australian Girl series published by Penguin - Meet Poppy, Poppy at Summerhill, Poppy and the Thief and Poppy Comes Home.

Gabi's latest book for middle readers is The Beast of Hushing Wood.

Be the first to review Two Enchanted Tales from Old China.