Finding My Way Back from Depression

I can't remember going to bed the night before my first ECT. Or giving my permission or my wife giving her consent, but she did and for my part I was so confused I would've agreed to be shot at point-blank range by a firing squad. Try as I might I couldn't get comfortable that night; I remember the physical distress and the floating stomach and wriggling and rubbing and twitching of my feet in bed before they came to collect me at 6 am exactly. Soon I shall be given a shot of electricity to lift my mood, as they keep putting it. What on earth is wrong with sadness? In early 2008, Barry Dickins suffered from insomnia. He went to the doctor, who cited anxiety as the cause and, then, depression. Clinical and severe. He checked in to the Albert Road Clinic, where he was told that he would be there until the joy returned to him. But where was it? The joy eluded Barry for months, so he stayed in the clinic, alongside patients with schizophrenia, bipolar disorders and other traumas, but depression was overriding. Depression that could fell you with a single blow. He took his medication and succumbed to the electro-convulsive therapy, which left him unable to grip a pen and riddled his memory with holes. The experience marked him for good, and is one that more people share than we might like to consider. Written with Barry's inimitable wit, humour and lyricism - and his ability to find the ridiculous and the jubilant amid the pain - Unparalleled Sorrow charts Barry's journey from the lows of the clinic to the small joys of a game of tennis with his young son. It follows the path to depression - via his salad days in St Kilda and the murder of his housemate - and the road out of it.

Be the first to review Unparalleled Sorrow. 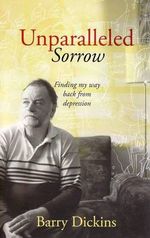