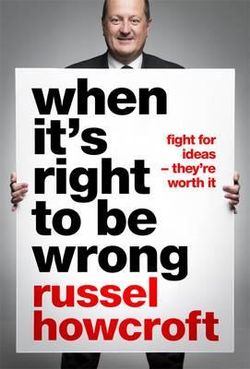 When It's Right To Be Wrong

Whether he's selling beer, health insurance or the army, former adman Russel believes in the power of the idea, and that creativity is needed to make good things happen. Whether it's about business or everyday life, Russel knows sometimes you simply have go against the tide. In When It's Right to Be Wrong we're let into the Howcroft view of the world. It's not what you expect to hear, but that's hardly surprising from the man who once wanted to put a dwarf, a nurse and a monkey in the same ad.

Changing your mind is a good thing. Privacy is overrated so give everyone your phone number. Smile at strangers. Forget reality; the right kind of BS can create magical success. Good people rise to the top. Work - life balance is bullshit. Russel Howcroft will challenge the way you look at the world. Don't wait to be right. Do it anyway.

Former adman Russel Howcroft is the public face of brand marketing and advertising in Australia thanks to his appearances on ABC's hugely successful show The Gruen Transfer and Network Ten's Recipe To Riches.

When he was twenty and partway through a marketing degree, Russel did a week's work experience at McCann Erickson agency. He fell in love with advertising and spent 24 years in the industry before joining Network Ten in 2013 as Executive General Manager, responsible for Ten's operations in Melbourne, Brisbane, Adelaide and Perth.

Russel has worked for some of the best agencies in the world including five years in the UK at Lowe Howard-Spink. He co-founded Leonardi Brandhouse and ran his own agencies with various partners for eleven years. In 2006 he joined George Patterson Y&R, Australia's oldest agency brand. The group included The Campaign Palace, VML, IdeaWorks and BrandAsset Consulting. Before moving into television, Russel was chairman and CEO of Young & Rubicam Brands Australia and New Zealand.

In 2010, media mogul Harold Mitchell presented Russel with a much-coveted Charlie Award for his personal brand creation off the back of The Gruen Transfer.

Be the first to review When It's Right To Be Wrong.

When It's Right To Be Wrong