From the bestselling author of Does My Head Look Big In This?

A boy. A girl. Two families. One great divide.

When Michael meets Mina, they are at a rally for refugees - standing on opposite sides.

Mina fled Afghanistan with her mother via a refugee camp, a leaky boat and a detention centre.

They want to stop the boats.

Mina wants to stop the hate.

When Mina wins a scholarship to Michael's private school, their lives crash together blindingly.

A novel for anyone who wants to fight for love, and against injustice.

"When Michael Met Mina is cutting and hilarious; powerful but warm; diverse but not didactic; fierce and encouraging. It is young adult fiction at its finest: unique and challenging, written well, and without condescension. Australian teens should read this book, then pass it on to their parents." Maxine Beneba Clarke, author of The Hate Race, Foreign Soil and Carrying The World

Randa is currently working on the film adaptation of her first novel, Does My Head Look Big in This? and is keen to use her intervention into popular culture to reshape dominant narratives around racism and multiculturalism.

Randa has written eight other books, including Ten Things I Hate About Me, Where the Streets Had a Name, Noah's Law and No Sex in the City. She lives in Sydney with her husband and three children.

Be the first to review When Michael Met Mina. 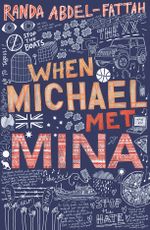