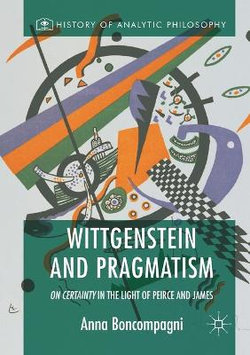 On Certainty in the Light of Peirce and James

This book investigates the conflicts concerning pragmatism in

Wittgenstein's work On Certainty, through a comparison with the

and William James. It also describes Wittgenstein's first encounters with

development of his thought. Offering a balanced, critical and theoretical

examination the author discusses issues such as doubt, certainty, common

sense, forms of life, action and the pragmatic maxim. While highlighting

the objective convergences and divergences between the two approaches,

the volume makes links to ongoing debates on relativism, foundationalism,

scepticism and objectivity. It will be of interest to anyone searching for new

Be the first to review Wittgenstein and Pragmatism.