Your Own Kind of Girl 2

This is the story I promised myself, aged twenty-one, that I would one day be brave enough - and well enough - to write.

Clare Bowditch has always had a knack for telling stories. Through her music and performing, this beloved Australian artist has touched hundreds of thousands of lives. But what of the stories she used to tell herself? That 'real life' only begins once you're thin or beautiful, that good things only happen to other people.

Your Own Kind of Girl reveals a childhood punctuated by grief, anxiety and compulsion, and tells how these forces shaped Clare's life for better and for worse. This is a heartbreaking, wise and at times playful memoir. Clare's own story told raw and as it happened. A reminder that even on the darkest of nights, victory is closer than it seems.

With startling candour, Clare lays bare her truth in the hope that doing so will inspire anyone who's ever done battle with their inner critic. This is the work of a woman who has found her true power - and wants to pass it on. Happiness, we discover, is only possible when we take charge of the stories we tell ourselves.

"The words that kept coming to me over and over again as I read this book were authenticity and decency. Clare Bowditch made me feel how wonderful and difficult and amazing it is to be a human."
Leigh Sales

"Brutal at times but funny as f@#k. This book will change a lot of lives for the better."
Bernard Fanning

"Reading this book felt as intimate as having a long, heart-breakingly vulnerable yet hilarious conversation with Clare by a fire with wine in hand. It is a celebration of the human struggle, how we can learn to befriend (and say "f@#k off" to) our demons, and ultimately write our own story. There is so much hope in this book."
Missy Higgins

"Clare Bowditch cements her status as one of Australia's most mesmerising storytellers with this debut. Her ability to lay bare the vulnerabilities, hurts and triumphs of a woman's life is second to none. She's my kind of girl, for sure."
Clementine Ford

"This book is like a life-buoy, tossed across a generation by a sick and frightened young woman, who grew up to be Clare Bowditch. An extraordinary tale, faithfully remembered and generously told. What a woman. A transfixing and powerful memoir."
Annabel Crabb

Clare Bowditch is a storyteller who lives in Melbourne with her husband Marty, their three teenage children, a white groodle, and one lone surviving free-ranging guinea pig. In terms of 'the fancy stuff', Bowditch is a bestselling ARIA Award-winning musician (Best Female Artist), Rolling Stone Woman of the Year (Contribution to Culture), Logie-nominated actor (for her role as 'Rosanna' on hit TV show Offspring), and a former ABC broadcaster who still misses her talk-back callers very much, and hopes they're doing okay out there.

In her spare time, Bowditch does a lot of public-speaking and event-running. She uses humour and the collective terror of 'public-singing' as tools to teach skills around courage and self-leadership. She is also the founder Big Hearted Business, a love project designed to support creative people in their businesses, and businesses with their creative thinking.

As a musician Clare has performed and toured with the likes of Leonard Cohen, Paul Kelly, Cat Power, John Butler, Snow Patrol and Gotye. The person she enjoys touring with the most is her drummer and husband, Marty Brown. 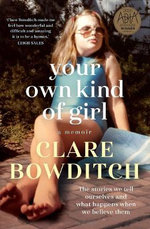 Feminism & feminist theory Memoirs True Stories for Mum
Hold on while we process your request.