by John Dickson Carr, Edward Hoch,  Margery Allingham and others

The Christmas season is one of comfort and joy, sparkling lights and steam rising from cups of mulled wine at frosty carol services. A season of goodwill, as families and friends come together to forget their differences and celebrate.

Unless, of course, you happen to be harbouring a grudge. Or hiding a guilty secret. Or you want something so much you just have to have it - whatever the cost. In A Very Murderous Christmas, ten of the best classic crime writers come together to unleash festive havoc, with murder, mayhem and twists aplenty.

From a murder aboard a snow-bound train to a pantomime costume that takes on a life of its own, these are mysteries as rich and satisfying as a Christmas dinner.

Margery Allingham was born in London in 1904. She sold her first story at age 8 and published her first novel before turning 20. She married the artist, journalist and editor Philip Youngman Carter in 1927.

In 1928 Allingham published her first detective story, The White Cottage Mystery, and the following year, in The Crime at Black Dudley, she introduced the detective who was to become the hallmark of her sophisticated crime novels and murder mysteries - Albert Campion.

Famous for her London thrillers, such as Hide My Eyes and The Tiger in the Smoke, Margery Allingham has been compared to Dickens in her evocation of the city's shady underworld. Acclaimed by crime novelists such as P.D. James, Allingham is counted alongside Dorothy L. Sayers, Agatha Christie and Gladys Mitchell as a pre-eminent Golden Age crime writer. Margery Allingham died in 1966.

Colin Dexter has won many awards for his novels including the CWA Gold Dagger and Silver Dagger awards.

In 1997 he was presented with the CWA Cartier Diamond Dagger Award for outstanding services to crime literature.

Colin's thirteenth and final Inspector Morse novel, The Remorseful Day, was published in 1999. He lives in Oxford.

Be the first to review A Very Murderous Christmas. 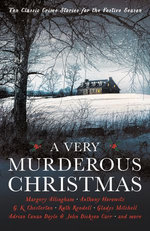 by John Dickson Carr, Edward Hoch,  Margery Allingham and others