Quentin is a successful lawyer in New York, but inside his head he is struggling with his own sense of guilt and the shadows of his past relationships. One of these an ill-fated marriage to the charming and beautiful Maggie, who went from operating a switchboard to become a self-destructive star - a singer everyone wanted a piece of.

After the Fall is often seen as the most explicitly autobiographical of Arthur Miller's plays, and Maggie as an unflinching portrait of Miller's ex-wife Marilyn Monroe, only two years after her suicide. But in its psychological acuity and depth, and its brilliant, dreamlike structure, it is a literary, and not just biographical, masterpiece.

Be the first to review After the Fall. 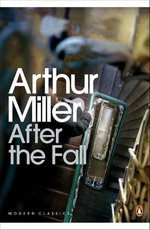