by Dan Slott and Giuseppe Camuncoli

Step over the edge of Spider-Verse! Spidey teams up with the all-new Ms. Marvel in a high-flying, (high-stepping in Kamala's case), adventure! Can Ms. Marvel get Spidey out of a jam? Plus, MC2's Spider-Girl and the Spider-Man of 1602 find themselves under attack from the mysterious forces behind Spider-Verse! And who is Spider-UK? Meanwhile, in the year 2099, the Superior Spider-Man lives on, but how? Otto takes the fight to Karn, the man working his way through the multiverse leaving a trail of dead spiders in his wake, but finds himself hopelessly overpowered. Can the Superior Spidey find enough allies to make a dent in Karn? The road to Spider-Verse starts here! Collects Amazing Spider-Man (2014) #7-8, Superior Spider-Man #32-33, Free Comic Book Day 2014 (Guardians of the Galaxy) #1!

Dan Slott has built a loyal fan base by combining old-school fun with stories and characterizations friendly to new readers. Following a run on She-Hulk which combined his sly humor and encyclopedic Marvel knowledge with an imaginative take on a comic-book law firm Slott moved into the upper echelon of Marvel writers, launching Avengers: The Initiative and taking the reins on Mighty Avengers from Brian Michael Bendis.

When Marvel gave Spider-Man a fresh start in 2008, Slott was one of several rotating writers on a thrice-monthly Amazing Spider-Man. Through three years and a hundred issues, Slott became the writer most closely identified with the web-slinger's "Brand New Day" era. Amazing hit the "Big Time" when Slott took over as full-time writer, chronicling a new chapter in the life of Peter Parker with artists such as Humberto Ramos, Stefano Caselli and Marcos Martin.

Be the first to review Amazing Spider-Man. 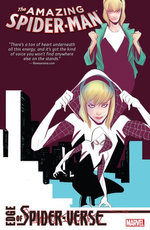 by Dan Slott and Giuseppe Camuncoli