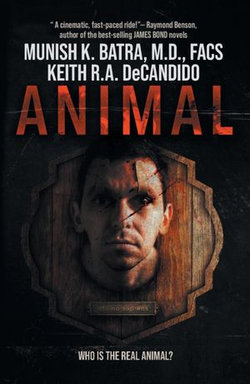 Animal is a relentless, thought-provoking, pulse-pounding thriller that will engross and enthrall. Do the most noble of intentions justify the most horrific acts?

Two grisly murders are committed at a meatpacking plant by a person wearing a cow mask…not long after the CEO of a water park is brutally killed by someone wearing an orca mask.

Interpol Agent An Chang believes these are the latest acts of a ruthless serial killer he has been chasing for more than twenty years…a killer who targets those who harm innocent animals.

Those who torture animals are not safe….

Working with two California detectives, Chang races to unmask the killer, as his spree ramps up. But the killer’s motives and history are far deeper than anyone realizes, and the truth of his rampage leads on a wild chase from the streets of Shanghai around the globe….

Who is the real animal?

"I promise you it will grab hold of you and not let go; it will inspire you, it will anger you and it will live uneasily in your mind for a long time."—David Fisher, New York Times bestselling author of Lincoln's Last Trial and Never Turn Your Back on an Angus Cow

“Animal is a serial killer thriller with a twist—the villain is actually doing something many animal rights activists might applaud. This provides the tale with a unique, ironic, and contradictory sensibility that is quite compelling. A cinematic, fast-paced ride!”—Raymond Benson, author of the bestselling The Black Stiletto series and James Bond novels

Be the first to review Animal.