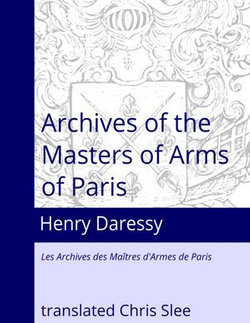 Archives of the Masters of Arms of Paris

by Henri Daressy and Chris Slee

The Corporation of the Master in Deeds of Arms of Paris was founded under the auspices of Charles IX in 1567 and, for the next 225 years, it regulated the conduct and teaching of fencing in Paris until its demise in the French Revolution. The Corporation included many of the most celebrated names of the French fencing world such as Pompée, Cavalcabo, Saint-Ange, de la Touche, le Perche, Liancour, De Brye, Danet, Boëssière, and many others.

Henry Daressy, whose father and grandfather were also famous fencing teachers, collected the Corporation's scattered documents over a thirty year period. His Les Archives des Maîtres d'Armes de Paris (1888) presents these documents which outline the changing the rules and regulations of the Corporation and detail some of its legal battles with unlicensed fencing teachers. He includes a number of brief portraits of famous members of the organisation.

Be the first to review Archives of the Masters of Arms of Paris. 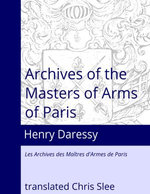 Archives of the Masters of Arms of Paris

by Henri Daressy and Chris Slee