In 2015, Congress tasked the Department of Defense to commission an independent assessment of U.S. military strategy and force posture in the Asia-Pacific, as well as that of U.S. allies and partners, over the next decade. This CSIS study fulfills that congressional requirement. The authors assess U.S. progress to date and recommend initiatives necessary to protect U.S. interests in the Pacific Command area of responsibility through 2025. Four lines of effort are highlighted: (1) Washington needs to continue aligning Asia strategy within the U.S. government and with allies and partners; (2) U.S. leaders should accelerate efforts to strengthen ally and partner capability, capacity, resilience, and interoperability; (3) the United States should sustain and expand U.S. military presence in the Asia-Pacific region; and (4) the United States should accelerate development of innovative capabilities and concepts for U.S. forces.

Be the first to review Asia-Pacific Rebalance 2025. 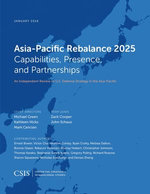