If you betrayed a friend, how far would you go to earn their forgiveness?

If someone had saved your life, would you risk your life to save them?

If you could bring someone back from the dead, who would you choose?

Clair and Jesse have barely been reunited when the world is plunged into crisis - the d-mat network is broken. People are trapped, injured and dying, and it's partly Clair's fault.

Peacekeepers enlist Clair to track down Q, the rogue AI - artificial intelligence - who saved her life and is the key to fixing the system. Targeted by dupes and abandoned by her friends, Clair finds powerful allies in the most unlikely places. But who can she trust? Q won't respond to her calls for help, and if Clair finds her, will she be trapping her friend in a life of servitude or sending her to death by erasure?

Caught between pro- and anti-d-mat philosophies, in a world on the brink of all-out war, Clair must decide where she stands - and who she stands with - at the end.

Be the first to review Crash: Twinmaker 2. 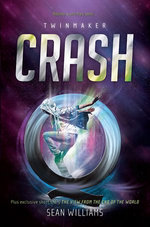