Creeping Conformity, the first history of suburbanization in Canada, provides a geographical perspective – both physical and social – on Canada's suburban past. Shaped by internal and external migration, decentralization of employment, and increased use of the streetcar and then the automobile, the rise of the suburb held great social promise, reflecting the aspirations of Canadian families for more domestic space and home ownership.

After 1945 however, the suburbs became stereotyped as generic, physically standardized, and socially conformist places. By 1960, they had grown further away – physically and culturally – from their respective parent cities, and brought unanticipated social and environmental consequences. Government intervention also played a key role, encouraging mortgage indebtedness, amortization, and building and subdivision regulations to become the suburban norm. Suburban homes became less affordable and more standardized, and for the first time, Canadian commentators began to speak disdainfully of 'the suburbs,' or simply 'suburbia.' Creeping Conformity traces how these perceptions emerged to reflect a new suburban reality.

Electronic Format Disclaimer: Two images removed at the request of the rights holder.

Be the first to review Creeping Conformity. 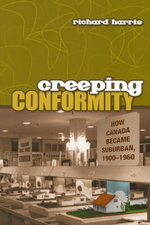 History of the Americas City & town planning - architectural aspects Urban & municipal planning
Hold on while we process your request.