The Cornerstone Biblical Commentary series provides up-to-date, evangelical scholarship on the Old and New Testaments. Each volume is designed to equip pastors and Christian leaders with exegetical and theological knowledge to better understand and apply God’s Word by presenting the message of each passage as well as an overview of other issues surrounding the text. The commentary series has been structured to help readers get at the meaning of Scripture, passage-by-passage, through the entire Bible.

The New Living Translation is an authoritative Bible translation, rendered faithfully into today’s English from the ancient texts by 90 leading Bible scholars. The NLT’s scholarship and clarity breathe life into even the most difficult-to-understand Bible passages—but even more powerful are stories of how people's lives are changing as the words speak directly to their hearts. That's why we call it “The Truth Made Clear.”

David L. Thompson (Ph.D., The Johns Hopkins University) has written scores of popular and professional articles. His books include Bible Study That Works and God’s Healing for Hurting Families. Dr. Thompson, an ordained elder in The Wesleyan Church, has pastored several churches.

Eugene Carpenter (Ph.D., Fuller Theological Seminary) is Scholar in Residence and Professor of Old Testament, Hebrew, and Biblical Theology at Bethel College, Mishawaka, IN. He has authored and contributed to several books including commentaries on Exodus and Deuteronomy.

David Thompson was born in Savannah, Georgia. He grew up playing Dungeons & Dragons and other roleplaying games, but turned his attention to Eurogames and Wargames in the 2000s. He began designing games in 2014, after moving to England and meeting the Cambridge-based chapter of Playtest UK.

His first published design was Armageddon, followed by Orc-lympics, Pavlov's House, Warchest, Castle Itter, and Switch & Signal. He now lives in Dayton, Ohio with his wife, two daughters, and son.

Be the first to review Ezekiel. 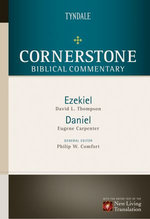