Xander discovers a new magical creature—millions of them, actually! In this adventure, a swarm of insects threatens the Montgomery Orchard and twelve-year-old Xander’s fruitful summer job. Luckily, the so-called bugs aren’t actually bugs. Unluckily, they’re miniature, unicorn-hating, insect fairies from the magical world of Pegasia! If Xander and his team of Rainbow-Barfing Unicorns can’t rid the orchard of these no-good fairies, their secret will be blown quicker than a stomach-load of full-spectrum chunks. Plump-full of grotesquely delightful characters and fantastical realms, Xander and the Rainbow-Barfing Unicorns—from writer Matthew K. Manning (Batman/Teenage Mutant Ninja Turtles Adventures)—is so epic it’ll make you wanna puke.

Matthew K. Manning is the author of over forty books and dozens of comic books. His work ranges from the popular Batman: A Visual History to a series of graphic novels featuring the military's bomb squad in Afghanistan.

Over the course of his career, Manning has written books starring Batman, Superman, Scooby-Doo, Iron Man, Wonder Woman, Flash, Green Lantern, and Harley Quinn, among others.

Be the first to review Fairies Hate Ponies. 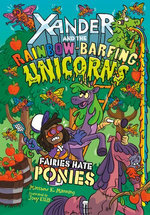