Fatal Score is a thriller about big data, an ordinary guy who discovers a terrible secret, and a quirky, brilliant woman who becomes his ally.

Kirkus Reviews calls it “A rousing launch to a thriller series that has potential regardless of which character takes the spotlight.” Edgar finalist Steve Ulfelder says, “With memorable characters, precise writing, and a very human story that all of us can relate to, Fatal Scoreis a brilliant debut thriller. Rogers' expertise in Big Data and today's Byzantine healthcare system propelled me straight through to the perfect final scene!”

Joe Mayfield’s life comes apart when his wife is denied cancer treatment. It’s a few years from now, after what the media called CyberWar I. In the wake of fires, dam breeches, power grid failures, and a small nuclear episode, the united states has rushed to develop the most secure data vault in history. Critical data are protected by a firewall called the Interagency Communication Channel, The Yak. Genetic research has given Congress the opportunity to control medical spending using a set of numbers somewhat like a credit score. A high health score gets you expensive cutting edge care. A low score? Painkillers and prayers at the end. So, what do you do when your wife’s healthscore is mysteriously slashed, she’s denied treatment and dies?

Joe’s frantic response is to hack into the Yak. Too late to save her, he finds the cruel secret that explains her death: an organization called Phoenix is skimming billions in false medical payments. His prying alerts Phoenix, but also Louise Napolitani (“Weezy”), the Yak’s best Tracker. Pursued by Phoenix thugs, Joe goes off the grid, living on cash in out-of-the-way places and remembering his wife through the music she loved. Weezy runs him down just before Phoenix catches him. Skeptical of Joe’s claims at first, she ferrets out the truth: thousands like Joe’s wife will die. Ignoring a gag order at work, she joins Joe in a single wide trailer in Panacea, Florida…way off the grid, or so they think until Phoenix finds them and comes up with a whole new take on “burn the evidence.”

Be the first to review Fatal Score. 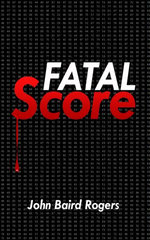