by Fiction Vortex, Jon Arthure Kitson,  Jackie Bee and others

This issue of Fiction Vortex is full of people who make bad decisions. Warning: don't mistake the characters in these stories for good role models. There's a guy who sabotages the future of his family's legacy out of spite, a woman who tells the world the apocalypse is coming, a man who signs his life away, and a married couple that thinks time travel can save them from their grief. 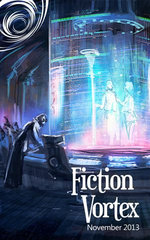 by Fiction Vortex, Jon Arthure Kitson,  Jackie Bee and others