by Fiction Vortex, Mary DeSantis,  Meredith Morgenstern and others

The holidays are always magical, when the stress isn't killing you. This issue is pretty magical, too, though there should far less stress involved. Maybe "magical" isn't the right term. All the stories this month are better described as "supernatural" because they are more about unusual things than straight hocus pocus. 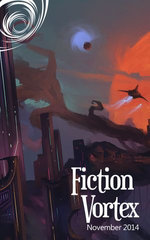 by Fiction Vortex, Mary DeSantis,  Meredith Morgenstern and others