'This is a fan's eye-view of Paul Gascoigne - and fans, as we know, are expert at reassembling dashed hopes...'

In 1987 Ian Hamilton - acclaimed poet, biographer and Tottenham fan - was smitten from afar by the impish skills of Newcastle United's Paul Gascoigne. When 'Gazza' duly signed for Spurs, Hamilton was sure that he and English football had found their new hero. But Gascoigne was destined to be brought low by tragic flaws, and Hamilton was ideally positioned to tell the tale in this, a peerless piece of football literature.

'By the final whistle Hamilton has sketched a compelling figure: reckless, cocky, twitchy, hyperactive and half bonkers... but with flashes of implausible grace that connect with the dreams of his audience.' Independent

Be the first to review Gazza Agonistes. 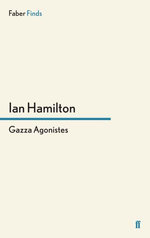