Revolution spreads like wildfire though humanity’s interstellar empire, sparked by the opening of Geodesica and the destruction of an entire inhabited system. But who was ultimately responsible? And who will pay the price?

Melilah Awad and Palmer Eogan delve deeper into Geodesica’s ancient alien labyrinth than anyone has ever dared, hoping to unravel its secrets before the hunter-killers from Earth bring them down. Former Exarch of Bedlam, Isaac Forge Deangelis, finds his grip on sanity slipping as his very reason for existing is ripped from him. While a rebel Exarch and Palmer Horsfall, grieving for her lost sister, form an alliance that might tear humanity’s interstellar empire apart….

Be the first to review Geodesica Descent. 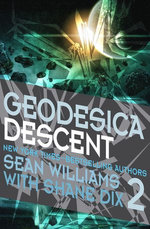