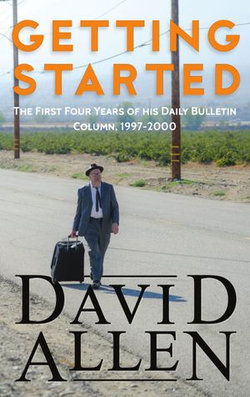 To mark his 20th anniversary at the Inland Valley Daily Bulletin, David Allen goes back to the beginning to survey his first four years of columns, when the valley was new territory for him. After unpacking endlessly, he reports for jury duty in Chino, attends a Mexican wrestling match in Pomona and pays attention to movie dialogue about Rancho Cucamonga.
Not limiting himself to local news, he wonders what a Rolling Stones tour in the distant future might be like (sponsor: Depends), considers applying for a job in Swaziland as the town hangman and enters clothing stores alert for clues about which side is for men.
Even if you follow David Allen's current work in your daily newspaper, you probably never saw these columns, or if you did, forgot you read them or repressed the memory. Here they are again, with all the duds removed (we hope), and with a candid introduction by the author about trying to establish himself when he was just - wait for it - getting started.

Be the first to review Getting Started. 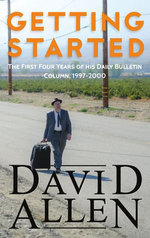 Regional studies Humour
Hold on while we process your request.