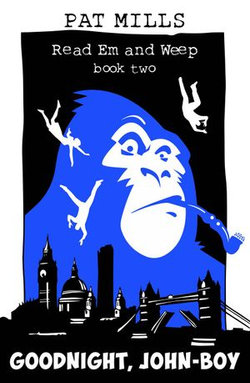 Read Em And Weep is the fictional saga of the Revolution that changed British comics forever. Based on the real-life comics and their creators, it's the story of *Blitzkrieg! *(Battle), *Aaagh! *(Action), Space Warp (2000 AD starring Judge Dredd), and Raven (Misty) told over four novels continuing with Book Two...Goodnight, John-Boy.

Now Dave and Greg have created Aaagh!, the 'comic of the streets', and Joy writes about thatgreat white shark. Every week it devours human prey - from nuclear scientists who destroyed Bikini Atoll to the President of the United States when Airforce One crashes in the Pacific. Aaagh! so enrages the establishment, it's torn up on live TV - an event that actually happened! Dave and Greg fight back and their crimes lead them to be sentenced to the Siberia of comics: the Laarf! Puzzle Specials.

Joy rescues them by suggesting they create the thrill-powered Space Warp. Then, to her fury, Dave and Greg sell out and bring back Dan Darwin, a legendary space hero that she believes should have been left to rest in space.

Even deadlier than his comics, Dave continues his work as a Serial Killer, a secret vigilante who kills monsters that harm kids. And his next target is TV celebrity and 'national treasure' Fabulous Keen. But Keen, the ultimate monster, discovers Dave's identity and prepares a terrible revenge.

Written by Pat Mills, creator of Action and 2000 AD, and co-creator of the cult-classic superhero hunter, Marshal Law (Marvel and D.C. Comics).

"Superb. Anyone who loves British comics should rush out and buy this."

"More fun than "The Spanker"!

More expensive than " The Fourpenny One"!!!

A great read on so many levels.

Read it and weep with laughter."

"An unsolved murder, Secret religious sects, Revenge killings, Celebrity misdoings, Angry nuns, Liquorice pipes and all set around the bizarre happenings of a comics publishing company in the 1970's - what more could you ask for?"

"this is the darker, seedier side of the 1970s, the world of British comics of that era being recreated in great style (who better to parody the beginnings of Battle, Action and 2000ad than the man who created them!)"

"had me hooked from start to finish"

Be the first to review Goodnight.