Richie Segal's prospects are pretty miserable and, what's more humiliating, his wife’s career is on the up. Richie knows he is a good salesman, but he just can't seem to land an account. He's starting to drink again and worry about whether Paula is seeing that old high school flame or maybe someone new. At thirty-four, he's a little young for a mid-life crisis, but that's what it feels like. And then there are those unwelcome memories of the neighbourhood bully, Michael Rudnick, and what he did to Richie when he was eleven...

Just when Richie is about as low as he can get, he runs into Rudnick on the street and knows exactly what he needs to do. Suddenly things seem to be going much better. That is until they get much, much worse.

In the classic tradition of Jim Thompson and Patricia Highsmith, Hard Feelings is a gripping, original novel of paranoia, obsession, and revenge.

Be the first to review Hard Feelings. 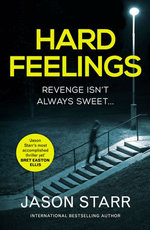