Only by working together will they survive...

A group of refugees from a powerful, sophisticated Core World planet have been on the run for seven years. The mission was to get away and give their children some time to grow up and help them carry on the cause. The cause was to help the rebellion, win the war and go home. But things didn’t quite turn out the way they planned.

Qeya, the future Queen of Datura, can't do much about her red hair, but she knows how to wield a scythe blade and suck the life out of her enemy, literally. Life seems great, if a little boring on heaven's edge. Until her ship is attacked and nearly everyone on board is murdered. Now, the miner who saved her is the only thing standing between her and the hungry beasts hunting them.

All Ohre wants is the kind of freedom a life in the sea can give. But he doesn't want to live it alone anymore. He wants the princess and if Qeya won’t come willingly, he’ll make her.

Tamn has always lived by a code. He doesn't question his duty. Until his crew is stranded on a hostile alien world and he's forced to watch the girl he loves burn in the sky. Stripped of his reason for living, the voices from his past haunt and guide him in a path of endless retribution. Only the strongest will survive the trials ahead and Tamn is determined to keep the family he has left alive. 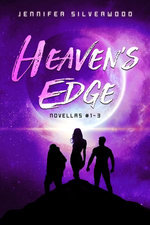