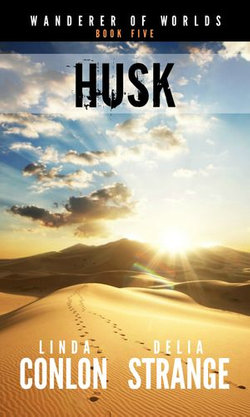 Heroes sacrifice themselves. Villains sacrifice others. Can one man live to be both?

Daeson awakens in a mangled car wreck with a dying woman. Forced to deal with the consequences of Synjan’s actions, Daeson’s resentment grows and their relationship fractures.

No longer supported by her companion and friend, Synjan invites a dangerous foe to join them—the Hunter himself.

As allies and enemies conspire on different worlds, Synjan, Daeson and Hawke head into a desolate landscape of sand, violence and treachery.

‘Husk’ is the fifth book in Linda Conlon and Delia Strange’s Wanderer of Worlds, a gritty contemporary fantasy. The series contains multiple perspectives, proactive characters, conspiracies, and shifting motives set against a backdrop of different worlds with their own languages and cultures. This ongoing tale combines the best traits of urban fantasy, action and light science fiction in a richly written, emotionally captivating adventure.

Seek out the first book ‘Axiom’ to find out why Wanderer of Worlds is a story like no other.

Be the first to review Husk. 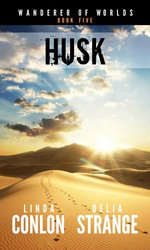