by Ronald Wintrobe, Margaret MacMillan,  Robert Fulford and others

For four decades, Ideas has presented more than 400,000 CBC Radio listeners in Canada and the United States with the most challenging contemporary thought of the day. Now, to mark the program’s 40th anniversary, executive producer Bernie Lucht has selected the most striking interviews and lectures for Ideas: Brilliant Thinker Speak Their Minds. Featuring some the best thinkers from North America and around the world that have appeared on the program since its beginnings in 1965, Ideas: Brilliant Thinkers Speak Their Minds touches upon societal values, how we govern ourselves, and navigating in the international community. In this remarkable book, Bernie Lucht, winner of the John Drainie Award for broadcast journalism, introduces readers to the origins of the ground-breaking program and to “the best ideas you’ll hear tonight.” Since the beginning, geopolitics has been one of the significant concerns of the program, and issues such as democracy, dictatorships, the nature of the nation-state, the public good, ideology, religion, peace and violence keep returning to the fore. Although many of the topics have been around for decades, the questions remain startlingly topical today, even in a radically changed world. Exploring geopolitics writ large, Ideas features interviews, lectures and radio documentaries with such influential contemporary thinkers as Tariq Ali, Michael Bliss, Noam Chomsky, Ursula Franklin, Northrop Frye, Bernard Lewis, Margaret MacMillan, James Orbinski, and many, many others. While each thinker speaks from his or her specific experience in time, the themes and concerns resonate as much today as they did last week or forty years ago.

Tariq Ali has written more than two dozen books on world history and politics the most recent of which are The Obama Syndrome, The Extreme Centre and The Dilemmas of Lenin as well as the novels of his Islam Quintet and scripts for the stage and screen.

He is a longstanding member of the editorial committee of New Left Review and lives in London.

Noam Chomsky is Institute Professor in the Department of Linguistics and Philosophy at the Massachusetts Institute of Technology, Boston. A member of the American Academy of Science, he has published widely in both linguistics and current affairs.

His books include At War with Asia, Towards a New Cold War, Fateful Triangle: The U. S., Israel and the Palestinians, Necessary Illusions, Hegemony or Survival, Deterring Democracy, Failed States: The Abuse of Power and the Assault on Democracy and Manufacturing Consent: The Political Economy of the Mass Media.

Noam Chomsky was recently named the world's number-one public intellectual in a poll by Prospect magazine. He is the author of numerous bestselling political works, including Hegemony or Survival, Imperial Ambitions and Failed States, all of which are published by Hamish Hamilton and Penguin.

Noam Chomsky is a professor in the Department of Linguistics and Philosophy at MIT, and is widely credited with having revolutionized modern linguistics.

Be the first to review Ideas: Brilliant Thinkers Speak Their Minds. 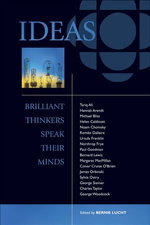 by Ronald Wintrobe, Margaret MacMillan,  Robert Fulford and others

Philosophy Society & social sciences
Hold on while we process your request.