In Search of J. D. Salinger

Ian Hamilton wrote two books on J. D. Salinger. Only one, this one, was published. The first, called J. D. Salinger: A Writing Life, despite undergoing many changes to accommodate Salinger was still victim of a legal ban. Salinger objected to the use of his letters, in the end to any use of them. The first book had to be shelved. With great enterprise and determination however, Ian Hamilton set to and wrote this book which is more, much more, than an emasculated version of the first.

For someone whose guarding of his privacy became so fanatical it is perhaps surprising how much Ian Hamilton was able to disinter about his earlier life. Until Salinger retreated completely into his bolt-hole outside Cornish in New Hampshire many aspects of his life, though it required assiduousness on the biographer's part, could be pieced together. A surprising portrait emerges; although there were early signs of renunciation, there were moments when his behaviour could almost be described as gregarious. The trail Hamilton follows is fascinating, and the story almost has the lineaments of a detective mystery with the denouement suitably being played out in Court.

'A sophisticated exploration of Salinger's life and writing and a sustained debate about the nature of literary biography, its ethical legitimacy, its aesthetic relevance to a serious reading of a writer's books' Jonathan Raban, Observer

'Hamilton's book is as devious, as compelling, and in a covert way, as violent, as a story by Chandler' Victoria Glendinning, The Times

Be the first to review In Search of J. D. Salinger. 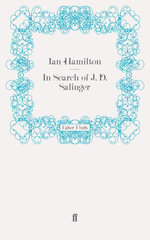 In Search of J. D. Salinger