Stunning modern new cover reissue of one of Penelope Fitzgerald’s best-loved novels Innocence is set in the 1950s, when Italy was picking up the pieces after the war. Chiara Ridolfi is the guileless daughter of a decrepit Italian family. Barney is her practical English girlfriend, who can sum up a man, she says, in one firm hand-grip. Salvatore is a penniless doctor from the south, who thinks he is proof against politics, social conscience and tenderness. Chiara’s cousin, Cesare, says very little, which gives him time to think…

Penelope Fitzgerald was one of the most elegant and distinctive voices in British fiction. Three of her novels, The Bookshop, The Beginning of Spring and The Gate of Angels have been shortlisted for the Booker Prize.

She won the Prize in 1979 for Offshore. Her last novel, The Blue Flower, was the most admired novel of 1995, chosen no fewer than nineteen times in the press as the 'Book of the Year'.

It won America's National Book Critics' Circle Award. She died in April 2000, at the age of eighty-three.

Be the first to review Innocence. 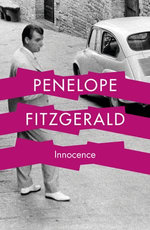