A thrilling short story from Australia's favourite novelist and author of the Scarecrow series and the new Jack West Jr novel The Three Secret Cities.

He is known for his cool head under pressure . . .

. . . and also for the battered fireman's helmet he has worn throughout his adventures.

This is the story of how he got it.

Be the first to review Jack West Jr and the Hero's Helmet. 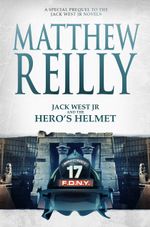