Laughter is a collection of three essays by French philosopher Henri Bergson, first published in 1900. It was written in French, the original title is Le Rire. Essai sur la signification du comique ("Laughter, an essay on the meaning of the comic").

Henri-Louis Bergson (18 October 1859 – 4 January 1941) was a French-Jewish philosopher who was influential in the tradition of continental philosophy, especially during the first half of the 20th century until the Second World War.

Bergson is known for his arguments that processes of immediate experience and intuition are more significant than abstract rationalism and science for understanding reality.

He was awarded the 1927 Nobel Prize in Literature "in recognition of his rich and vitalizing ideas and the brilliant skill with which they have been presented". In 1930 France awarded him its highest honour, the Grand-Croix de la Legion d'honneur.

Bergson's great popularity created a controversy in France where his views were seen as opposing the secular and scientific attitude adopted by the Republic's officials.

Be the first to review Laughter. 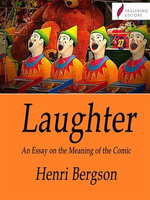