The Seer yanks his chain, and Silas could swear she does it for fun. Knowing that she manipulates everyone around her hasn't helped him at all. His little band of misfits has come apart. Edie is gone and refusing to speak to him. Mark is still trying to figure out how to control his ability and the Seer has ordered him to keep the boy in the dark. And Callie tempts him with a life he cannot have. A seat on the powerful Witches Council has opened up and Silas is stuck in the middle of the machinations unfurling over which faction of the witches will gain the upper hand. Angry witches, lies, and murder are just the start. Events in the Windy City will push Silas to the edge and reveal an unexpected enemy.

“There is another world touching ours that is filled with demons or, at least, that’s what we call them. They call themselves something else entirely, though that is neither here nor there. Every now and again, human beings manage to pull these demons through to our side. The human dies, of course, and the demon gets a person shaped suit to live in. We call these creatures the demonridden.”

Be the first to review Liar's Game. 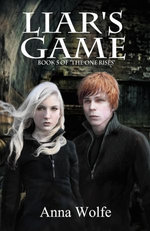