From the author's introduction:

*Ancient battles seize the modern imagination. Far from being forgotten, they have become a significant aspect of popular culture, prompting a continuing stream of books, feature films, television programs and board and computer games... there is a certain escapist satisfaction in looking back to an era when conflicts between entire states turned on clear-cut pitched battles between formed armies, lasting just a few hours and spanning just a few miles of ground. These battles were still unspeakably traumatic and grisly affairs for those involved - at Cannae, Hannibal's men butchered around two and a half times as many Romans (out of a much smaller overall population) as there were British soldiers killed on the notorious first day of the Somme.

However, as with the great clashes of the Napoleonic era, time has dulled our preoccupation with such awful human consequences, and we tend to focus instead on the inspired generalship of commanders like Alexander and Caesar and on the intriguing tactical interactions of units such as massed pikemen and war elephants within the very different military context of pre-gunpowder warfare.*

Lost Battles takes a new and innovative approach to the battles of antiquity. Using his experience with conflict simulation, Philip Sabin draws together ancient evidence and modern scholarship to construct a generic, grand tactical model of the battles as a whole. This model unites a mathematical framework, to capture the movement and combat of the opposing armies, with human decisions to shape the tactics of the antagonists. Sabin then develops detailed scenarios for 36 individual battles such as Marathon and Cannae, and uses the comparative structure offered by the generic model to help cast light on which particular interpretations of the ancient sources on issues such as army size fit in best with the general patterns observed elsewhere. Readers can use the model to experiment for themselves by re-fighting engagements of their choice, tweaking the scenarios to accord with their own judgment of the evidence, trying out different tactics from those used historically, and seeing how the battle then plays out. Lost Battles thus offers a unique dynamic insight into ancient warfare, combining academic rigor with the interest and accessibility of simulation gaming. This book includes access to a downloadable computer simulation where the reader can view the author's simulations as well create their own.

Be the first to review Lost Battles. 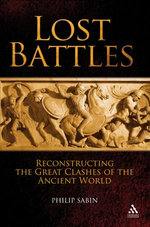