by Marion Lennox and Alison Roberts

He wanted to marry her once, but right now Ben McMahon needs a doctor, and recently returned Ginny Koestrel is the only one around.

Life, however, has taken away Ginny's confidence as a doctor. The only thing she clings to is her adorable stepdaughter, Button. Ben wants to help Ginny rebuild her life, but he might fall for her all over again. Will it take an earthquake to bring them back together?

Always The Hero by Alison Roberts

It broke Abigail's heart to leave Tom Kendrick, but the sexy rescue paramedic was always being the hero. It made Abby feel she came second in his life – she couldn't risk their baby feeling that way too.

When an earthquake strikes Kaimotu, Tom flys to the rescue. Seeing Abby again – and learning he's a father – makes his heart pound more than adrenalin ever did. This is his one chance to fight for his child and the woman he loves!

Marion Lennox is a country girl, born on an Australian dairy farm. She moved on, because the cows just weren't interested in her stories! Married to a 'very special doctor', she has also written under the name Trisha David. She's now stepped back from her 'other’ career teaching statistics. Finally, she’s figured what's important and discovered the joys of baths, romance and chocolate. Preferably all at the same time! Marion is an international award winning author.

Be the first to review Miracle On Kaimotu Island/Always The Hero. 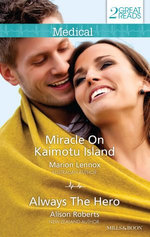 by Marion Lennox and Alison Roberts