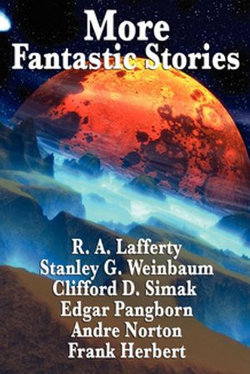 by Frank Herbert, Andre Norton,  Stanley G. Weinbaum and others

Collected here are six fantastic science fiction stories by R. A. Lafferty, Stanley G. Weinbaum, Clifford D. Simak, Edgar Pangborn, Andre Norton, and Frank Herbert. 'Sodom and Gomorrah, Texas': The place called Sodom was bad enough. But right down the road was the other town-and that was even worse! 'The Worlds of If': Dixon Wells, a fashionable playboy, is always late. What will it cost him this time. 'The Street That Wasn't There': Jonathon Chambers went for a walk at the same time every day for twenty years. But this time when he got home nothing seemed quite right. 'The Good Neighbors': You can't blame an alien for a little inconvenience - as long as he makes up for it! 'The Gifts of Asti': She was the guardian of the worlds, but HER world was dead. 'Operation Haystack': It's hard to ferret out a gang of fanatics; it would, obviously, be even harder to spot a genetic line of dedicated men. But the problem Orne had was one step tougher than that!

Frank Herbert (1920-86) was born in Tacoma, Washington and worked as a reporter and later editor of a number of West Coast newspapers before becoming a full-time writer.

His first SF story was published in 1952 but he achieved fame more than ten years later with the publication in Analog of 'Dune World' and 'The Prophet of Dune' that were amalgamated in the novel Dune in 1965.

Be the first to review More Fantastic Stories. 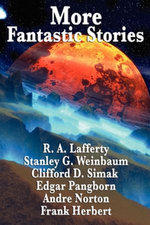 by Frank Herbert, Andre Norton,  Stanley G. Weinbaum and others