This book is a collection of the finest mystical writings of the great physicists of the 20th Century. They are Max Planck, Albert Einstein, Niels Bohr, Werner Heisenberg, Erwin Schrödinger, Wolfgang Pauli, James Jeans, Arthur Eddington, Eugene Wigner, David Bohm, and Freeman Dyson. The essays are written in nontechnical language and will be of absorbing interest to a wide range of readers.

The most beautiful thing we can experience is the mysterious. It is the fundamental emotion which stands at the cradle of true art and true science. He who knows it not and can no longer wonder, no longer feel amazement, is as good as dead, a snuffed-out candle. It was the experience of mystery--even if mixed with fear--that engendered religion. A knowledge of the existence of something we cannot penetrate, of the manifestations of the profoundest reason and the most radiant beauty, which are only accessible to our reason in their most elementary forms--it is this knowledge and this emotion that constitute the truly religious attitude; in this sense, and in this alone, I am a deeply religious man. --- Albert Einstein

At one extreme is the idea of an objective world, pursuing its regular course in space and time, independently of any kind of observing subject; this has been the guiding image of modern science. At the other extreme is the idea of a subject, mystically experiencing the unity of the world and no longer confronted by an object or by any objective world; this has been the guiding image of Asian mysticism. Our thinking moves somewhere in the middle, between these two limiting conceptions; we should maintain the tension resulting from these two opposites. --- Werner Heisenberg

The scientific picture of the real world around me is very deficient. It gives a lot of factual information, puts all our experience in a magnificently consistent order, but it is ghastly silent about all and sundry that is really near to our heart and that really matters to us. It cannot tell us a word about red and blue, bitter and sweet, physical pain and physical delight; it knows nothing of beautiful and ugly, good or bad, God and eternity. --- Erwin Schrödinger

The essential fact is simply that all the pictures which science now draws of nature, and which alone seem capable of according with observational fact, are mathematical pictures. Most scientists would agree that they are nothing more than pic¬tures—fictions, if you like, if by fiction you mean that science is not yet in contact with ultimate reality... To speak in terms of Plato's well-known simile, we are still imprisoned in our cave, with our backs to the light, and can only watch the shadows on the wall. --- James Jeans

Scientific instincts warn me that any attempt to answer the question "What is real?" in a broader sense than that adopted for domestic purposes in science, is likely to lead to a floundering among vain words and high-sounding epithets. We all know that there are regions of the human spirit untrammelled by the world of physics. In the mystic sense of the creation around us, in the expression of art, in a yearning towards God, the soul grows upward and finds the fulfillment of something implanted in its nature… Whether in the intel¬lectual pursuits of science or in the mystical pursuits of the spirit, the light beckons ahead and the purpose surging in our nature responds. --- Arthur Eddington

It appears that mind, as manifested by the capacity to make choices, is to some extent inherent in every atom. The universe as a whole is also weird, with laws of nature that make it hospitable to the growth of mind. I do not make any clear distinction between mind and God. God is what mind becomes when it has passed beyond the scale of our comprehension. God may be either a world-soul or a collection of world-souls. So I am thinking that atoms and humans and God may have minds that differ in degree but not in kind. --- Freeman Dyson

Be the first to review Quantum Physics and Ultimate Reality: Mystical Writings of Great Physicists. 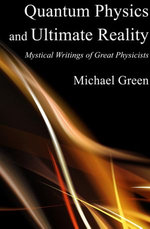