by Tony DiTerlizzi, Brom,  Guillermo del Toro and others

New York Times bestselling creator Tony DiTerlizzi is known for his distinctive style depicting fantastical creatures, horrific monsters, and courageous heroes. His illustrations reshaped and defined the worlds of Advanced Dungeons and Dragons, Planescape, and Magic: The Gathering in the imaginations of legions of devoted roleplaying gamers during the 1990s, before he transitioned to mainstream success with The Spiderwick Chronicles and The Search for WondLa. Collected here for the first time, this book features never-before-seen artwork and photographs, in addition to showcasing DiTerlizzi's most iconic roleplaying work with commentary by the artist. Introduction by Christopher Paolini (Eragon) and featuring appreciations by Guillermo del Toro, Brom, Jane Yolen, Holly Black, Zeb Cook, Jeff Easley, and Donato Giancola, among others!

Tony's work has a distinct flair, a love for monsters if you will . . . His creatures have the charm of Henson or Rackham but they carry with them hints of their own ecosystem . . . Tony stands alone as a world creator and a weaver of tales, may you treasure these art pieces as much as I do.

Tony DiTerlizzi is a New York Times bestselling author and illustrator who has been creating books for over a decade.

From his fanciful picture books such as The Spider & The Fly (a Caldecott Honor book) to chapter books like Kenny and The Dragon and the WondLa trilogy, DiTerlizzi always imbues his stories with a rich imagination.

With Holly Black he created the middle-grade series The Spiderwick Chronicles, which has sold millions of copies, been adapted into a feature film and been translated in over thirty countries.

Guillermo del Toro is the award-winning director of Pan's Labyrinth, Hellboy and Pacific Rim, and screenwriter of the recent 'Hobbit' film adaptations.

Together with Chuck Hogan, del Toro wrote The Strain trilogy, which the authors are currently producing as a cable series for FX Networks.

Be the first to review Realms: The Roleplaying Art of Tony DiTerlizzi. 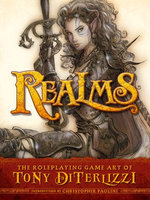 by Tony DiTerlizzi, Brom,  Guillermo del Toro and others

Popular culture Individual artists Graphic novels
Hold on while we process your request.