William Pullar ‘Sandy’ Jardine is an Ibrox icon. Respected and revered throughout the football world and beyond, he will forever be a club legend.

Sandy was the consummate professional. His silky skills, speed and ability to read the game were combined with a sense of fair play that made him truly world class. He was soon an integral part of the Rangers team and became a club legend when the Barcelona Bears won the European Cup Winners’ Cup in 1972. He also played in two dramatic World Cups and won 39 caps for Scotland. Later, Edinburgh-born Sandy fulfilled another personal dream when he signed for Hearts – and his impact at Tynecastle was immense.

Then, in 2012, the financial meltdown at Rangers brought Sandy back into the limelight. In those troubled times, nobody did more than Sandy Jardine to galvanise the club and its supporters, and he famously led 8,000 fans to Hampden to protest against sanctions imposed by the SFA. But in late 2012, Sandy announced that he was battling cancer, a fight he would bravely lose in April 2014.

SANDY – The Authorised Biography of Sandy Jardine is the definitive story of one of football’s true legends and a fitting tribute to a man who was loved and respected by family, friends and football fans wherever he went.

Be the first to review Sandy. 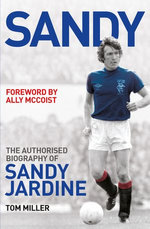